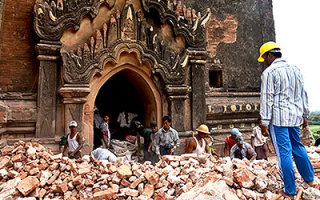 Cyclones, typhoons, floods and earthquakes have been identified as the biggest threats to human development.

Such events have an equally devastating impact on cultural heritage. For example, the 2015 earthquake in Nepal caused damage estimated at USD 169 million to over 700 cultural heritage sites.

Similarly, violent conflicts are threatening world peace and cultural diversity, both of which are inherently linked to human development. The intentional destruction of cultural heritage has become a weapon of war, and the illicit trafficking of antiquities is helping to sustain conflicts.

Aiming at building capacities for effective risk management of cultural heritage, ICCROM has developed a two-track programme.  One track aims to enhance national capacities for prevention and disaster risk mitigation, while the other focuses on facilitating efficient local responses in order to protect heritage during complex emergencies. The goal is to work with Member States and partners to safeguard humanity’s heritage, promote peace and build resilience.