International seminar addresses the issue of heritage on fire 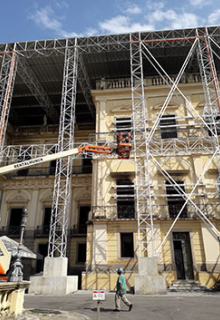 Update: on the occasion of Brazil's National Museum Professional day on 18 December 2019, the Brazilian Institute of Museums has published the trilingual Rio de Janeiro Declaration on Fire Risk Reduction in Cultural Heritage, available for free download on their website.

Around 500 professionals and students from the heritage sector and beyond came together at Brazil’s National History Museum to participate in the international seminar Heritage on fire: who’s next? - Fire risk management for cultural heritage (26-28 June, Rio de Janeiro), which addressed the pressing issue of how to effectively reduce cultural heritage losses to fire.

Organized by ICCROM in collaboration with IBRAM (Instituto Brasileiro de Museus) and ICOM Brasil in partnership with the British Council, UNESCO Office in Brazil, IPHAN (Instituto do Patrimônio Histórico e Artístico Nacional), and the National Museum of Brazil, the seminar benefitted from a wide-ranging selection of contributions delivered by 17 international experts, as well as from ICOM and ICCROM.

In his opening speech, the Director-General of ICCROM, Dr Webber Ndoro, reiterated that fire is a significant hazard to cultural heritage, and stressed the importance of prioritizing maintenance and proper monitoring as effective ways to prevent fires in heritage assets. Referring to the devastating blaze at Brazil’s National Museum in September 2018, Dr Ndoro pleaded that this tragedy should be turned into something positive, providing an important lesson and an opportunity to reflect critically on how to avoid or minimize the reoccurrence of such events in the future. He thanked the Brazilian heritage authorities and other partner institutions for their invaluable and timely support to organize the seminar, and reaffirmed ICCROM’s commitment to continue to work with its Member States on this crucial topic. 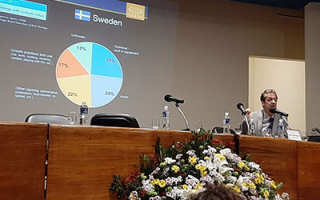 The technical sessions of the seminar kicked off with ICCROM’s Project Manager José Luiz Pedersoli Jr.’s presentation of recent fire statistics from Brazil, Canada, China, Japan, and Sweden. The data provide concrete evidence that cultural heritage around the world is continually affected by fire. Canadian libraries in the province of Quebec experience an average of three fires per year, Japanese cultural properties an average of four fires per year, and Chinese cultural relics sites five fires per year. Meanwhile, Swedish cultural buildings are affected by an average of six fires per year, while Canadian museums nationwide and Brazilian museums within the State of São Paulo undergo an average of nine fires per year. According to subsequent speakers, averages are even higher for listed buildings and museums in the United Kingdom and United States. Taking into account the size of the population of heritage assets in each case, the estimated probability of fire per individual asset over a 30-year period ranges between 1% and 40%.

The statistics also show that unsafe practices, electrical or technical failure in building systems, or other equipment failure are the main cause of fires: these caused 42% of fires in Sweden, 60% in Canada, and 71% in China. Such fires can be effectively prevented through proper maintenance and safety measures, said Pedersoli.

Quantitative risk analyses shared by Irene Karsten from the Canadian Conservation Institute (CCI) consistently show fire as a top priority when compared with other risks to heritage assets in Canada. Similar results have been obtained by Pedersoli in Brazil. Karsten has also presented quantitative results demonstrating that fire risk reduction measures, although often more costly, are amongst the most cost-effective options to protect cultural heritage assets.

Aparna Tandon, Project Manager at ICCROM, pointed at the growing threat to tangible and intangible cultural heritage posed by large-scale fires affecting wider populated areas or heritage sites. This includes increasingly larger and more frequent wild fires due to climate change. In this case, intersectoral coordination and community involvement are essential to build resilience and respond effectively. Taking advantage of her participation in the seminar, Tandon led a one-day workshop on Inter-agency coordination and cooperation for disaster resilient heritage. This pioneering activity in Brazil brought together over 25 participants from the heritage, disaster risk reduction and emergency management agencies to discuss and plan on how best to integrate cultural heritage into national and local disaster risk management planning.

The seminar also addressed the polemic topic of using fire sprinklers to protect cultural heritage. A common perception, significant amongst heritage professionals, is that the risk of water damage due to sprinkler failure is greater than the risk of fire damage. This possibly stems from misunderstandings concerning how sprinkler systems work, their reliability, and the relative magnitude of the two risks. As an example, it is common for people to think that all sprinkler heads will discharge simultaneously in the so-called ‘Hollywood effect’. The rate of accidental discharge for fire sprinklers, of the order of 1 in 16 million, is not widely known. However, the risk of fire damage to a heritage asset is several orders of magnitude greater than that of localized water damage due to failure of a sprinkler head. This is why major heritage institutions like CCI and the Smithsonian respectively recommend on a systematic basis the use of fire sprinklers for the protection of heritage assets, and thoroughly implement this recommendation themselves.  During the seminar discussions, an online poll gauged the audience’s opinion (see graph). Interestingly, the result shows a significant shift towards the acceptance of fire sprinklers in heritage collections areas compared to previous surveys carried out by ICCROM. 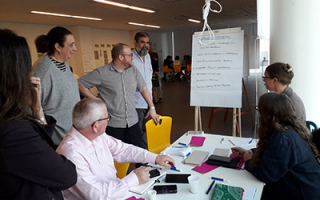 The seminar’s plenary sessions successfully covered a broad spectrum of topics related to Fire risk management for cultural heritage, from legislation and policies to the state-of-the-art in fire safety resources; from first aid, recovery, and restart to building a fire risk culture in heritage organizations. Several case studies were presented, and important lessons learned in each case were shared. A visit to Brazil’s National Museum and a presentation given by its Deputy Director, Ms. Cristiana Serejo, provided a window into the ongoing recovery actions and the future of this prominent heritage institution. 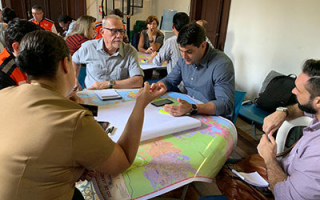 On the seminar’s last day, a specialist forum brought together the international group of participating experts to engage in focused and in-depth discussions on the main challenges to protect cultural heritage against fire, and the best solutions to overcome them. Five thematic axes were addressed by the group.  These included:

The result was a set of recommendations that are currently being consolidated and will soon be published by the organizers. Together with the seminar postprints, they will provide a concrete output to support policy changes and ensure wide dissemination of outcomes. Stay tuned!