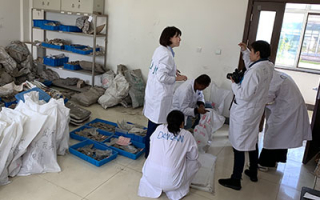 After the successful experience of RE-ORG Chengdu in 2015, ICCROM organized a new edition of RE-ORG China in Datong City, Shanxi Province. The Yungang Grottoes Museum hosted the two-week workshop (from 16-26 September), which benefited from the generous support of the China National Cultural Heritage Administration (NCHA) and the Chinese Academy of Cultural Heritage (CACH).

Twenty-two museum professionals were selected as participants, of which 12 were international and 10 from China. In total, 14 countries were represented at the course: China, Australia, Benin, Egypt, France, India, Italy, Madagascar, Senegal, Serbia, Spain, Sudan, Thailand and the United Kingdom.

The purpose of the workshop was to familiarize the participants with the RE-ORG method, developed by ICCROM and UNESCO in collaboration with the Canadian Conservation Institute (CCI), in order to promote a worldwide improvement of existing storage areas. 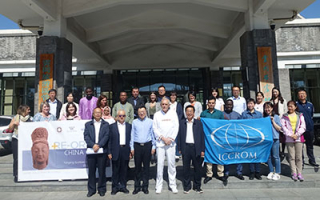 The participants worked with important archaeological objects coming from the Yungang Grottoes, which now form part of the museum collection. The site represents the outstanding achievement of Buddhist cave art in China in the 5th and 6th centuries and includes 252 caves and 51 000 statues. The caves became a UNESCO World Heritage site in 2001 and constitute a classical masterpiece of the first peak of Chinese Buddhist art.

Every participants practiced on all four phases of the method, with the common objective of reorganizing the storage areas of the Yungang Grottoes Museum. Taking into account the international character of the training, all of the participants had the opportunity to discuss and present the difficulties that they encounter in their respective museums and countries. By sharing their personal experiences, the participants and teachers gained insights about the different contexts in which storage spaces and collections are managed.

On the second-last day, the participants finished the implementation of the projects, reorganizing six storage rooms of the museum and moving more than 1000 objects.