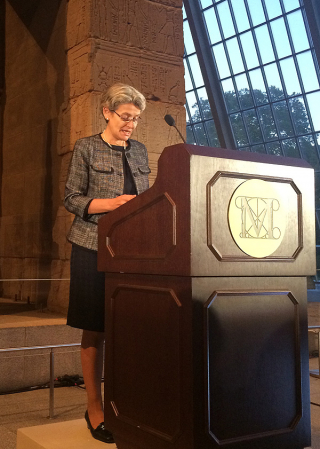 ICCROM shares and supports the strong statement of UNESCO’s Director-General, Dr Irina Bokova, condemning the destruction of archaeological heritage as videotaped at the Mosul Museum and at the site of the Nergal Gate by ISIL militants.

Professing deep shock at images of the smashing of statues from the sites of Hatra and Nineveh, Dr

Bokova affirmed, “I condemn this as a deliberate attack against Iraq’s millennial history and culture, and as an inflammatory incitement to violence and hatred.”

Calling for an immediate meeting of the UN Security Council to discuss “protection of Iraq’s cultural heritage as an integral element for the country’s security”, Dr Bokova underlined that “this attack is far more than a cultural tragedy – this is also a security issue as it fuels sectarianism, violent extremism and conflict in Iraq.”

The Mosul Museum is the second most important museum in Iraq.  Badly looted in the 2003 Iraq War, it houses priceless artifacts from the region’s 3000 year history.