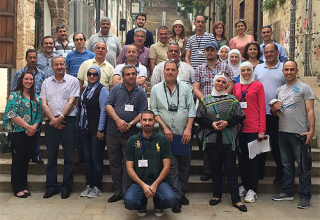 In efforts to provide support to cultural heritage professionals in Syria, the ICCROM-ATHAR Regional Centre recently joined forces with UNESCO and the Arab Regional Centre for World Heritage – Bahrain (ARC-WH) to hold a course in Beirut, Lebanon, on First Aid to Built Cultural Heritage for Syrian professionals.

The aim was to establish national teams capable of undertaking emergency response interventions to secure endangered built cultural heritage, and train other colleagues in the country.

The training is the follow-up to a workshop organized in late 2014, which was attended by nine of the participants to this year’s course. International and Syrian experts from UNESCO, ICCROM, ICOMOS and local NGOs conducted this workshop’s programme that was developed in close cooperation with the Directorate General of Antiquities and Museums (DGAM) in Syria.