Post -training, the participants of the FAC international courses have a unique opportunity to submit proposals for First Aid projects they wish to undertake in their respective countries. The short-listed proposals get seed grants from the Cultural Emergency Response Programme of the Prince Claus Fund, the Netherlands. The aim is to utilize knowledge obtained from this training to strengthen capacities for disaster risk management for cultural heritage at national or regional levels.

A training course on the First Aid to culture heritage in times of crisis was organized in Syria for the first time between 13 - 24 August 2017, where 30 participants from 12 different institutions and different educational backgrounds, 21 women and nine men, were trained. Eight of the participants were from the DGMA of Homs and 22 from other 12 different  institutions  including university, the ministry of tourism,  the ministry of Culture, the civil defense, the Fire department, the religious institute (awkaf), Directorate of Education and culture, the united nation branch in Homs and the Red Crescent Organization.

Parts of this course simulated emergency events, role-plays and group discussions. Participants learned through on-site exercises how to do on-site surveys, documenting structures and mapping sites, doing an initial damage assessment, identifying priorities, as well as having a chance to practice emergency stabilization methods for heritage structures. The practical work continued with the introduction of topics involving the evacuation, stabilization and salvage of collections. They also acquired general information on trauma, media, negotiations and leadership skills. The on-site field works were performed in different locations in the old city of Homs that were damaged by the conflict and in the DGMA building of Homs.

In addition to training 30 cultural first aiders, this course brought people from different organizations to work together. It had a huge impact on participants: they not only enhanced their knowledge but also started thinking differently about the role that cultural heritage can play in building peace in our society.

The course was held and organized in Homs by the Engineering Syndicate and the SYRIAN Heritage Conservation Committee with the support of Prince Claus Fund and ICCROM-ATHAR.

The results were beyond the participants expectations. The increasing conflicts in the Arab region exposed both the vulnerability of cultural assets and the lack of preparedness in the region, thus emphasizing the need to strengthen the response to such disasters. The course had a great impact on the city Homs, as professionals working in the field of cultural preservation, as well as NGOs, saw the importance of this course that highlighted the significant role that heritage institutions and professionals can play in preparing themselves for a crisis, taking appropriate measures that can limit and prevent damage to both sites and collections.

Through the development of the scientific content and the training methodology developed by ICCROM experts to fit the damaged heritage sites in Syria, these courses can play an important role in cultural heritage first aid training, raising awareness of the importance of the protection of heritage in times of crisis, highlighting the importance of cultural heritage and its role within society in the recovery process after the crisis, as well as expanding ICCROM’s network and access to conflict areas. 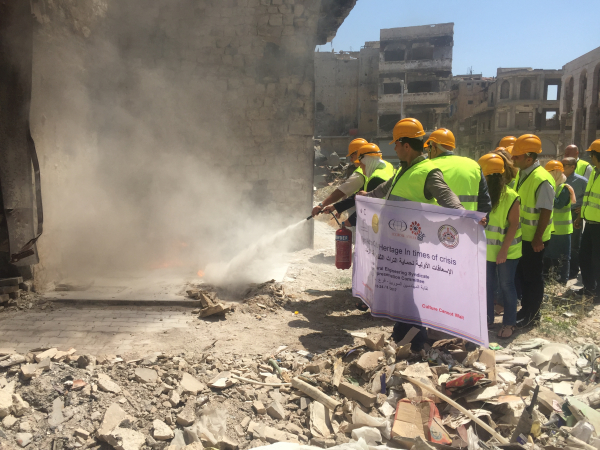 2.  Specialized Training Course on the Protection of Cultural Heritage with PROMEDHE

In the immediate aftermath of a large scale emergency, the top priority is to save lives and restore communication and access to vital resources. Depending on the scale of the emergency, civil protection plays a pivotal role in the coordination of an emergency response.

Given their role as emergency responders, is it possible for national civil protection authorities to extend their roles to include the coordination of safeguarding cultural heritage during an emergency?

The Italian Department of Civil Protection, or Protezione Civile, believes so.  It has worked to secure and salvage cultural heritage affected during most of the emergencies affecting the country over the past 20 years, including the 2016-2017 earthquakes in Central Italy. Read more.. 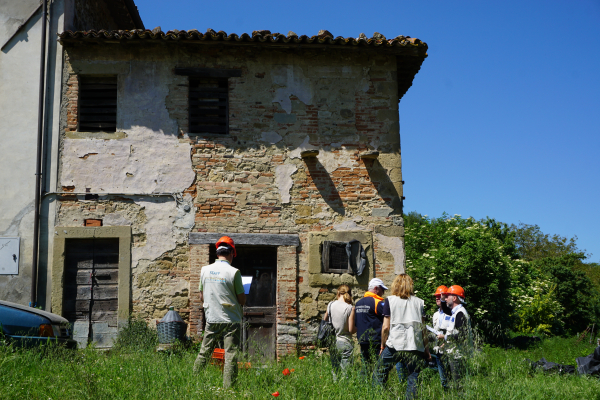 The three Cultural Heritage without Borders organizations in the Western Balkans (CHwB-Albania, CHwB-BiH, CHwB-Kosovo) teamed up to organize a three-week Course on Disaster Risk Management for Cultural Heritage from 7-27 November 2016. This training was held in three historic cities across the Western Balkans: Sarajevo, BiH (week 1), Prishtina, Kosovo (week 2) and Gjirokastra, Albania (week 3). This was the second training within the framework of the Balkan Cultural Aid Response for Emergencies (B+CARE) program.

This training course was designed to take participants through the disaster risk management (DRM) cycle: from risk assessment to prevention and mitigation to emergency preparedness and response to post-disaster damage assessment and ‘cultural first aid’ treatment. In each location, participants applied these principles and approaches to a different type of heritage resource: museum collections in Sarajevo; historical urban landscapes in Prishtina; and intangible heritage in Gjirokastra.

In total, there were 26 participants trained from 11 countries across the Balkans and elsewhere in Eastern Europe and North Africa. They were joined by six volunteers from the B+CARE network (see link below) and 28 trainers and lecturers from nine different countries. Funding for this training was provided by the Prince Claus Fund and the government of Sweden.

One of the high points of the training activity was the panel discussion held in Gjirokastra, which gathered together four representatives of different institutions related to disaster risk management, international development and heritage to address the following key ideas:

Institutions represented on the panel included: the Swedish International Development Cooperation Agency (SIDA); the Albanian National Emergency Operations Centre; the Directorate of Tangible Heritage and Museums, at the Albanian Ministry of Culture; and ICCROM.

More information about the B+CARE network can be found here: http://www.balkancare.net/en/about/ 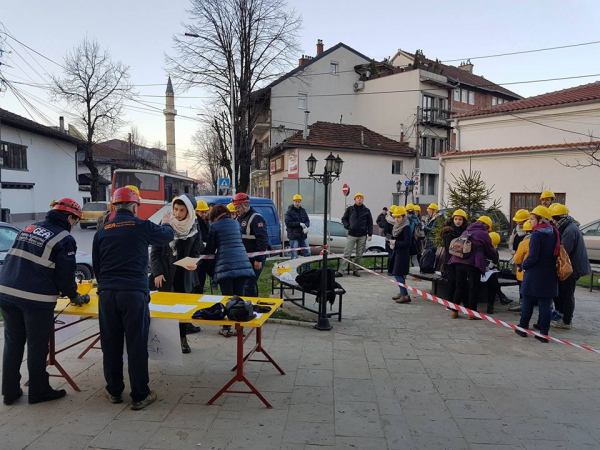 A training workshop on First Aid for Cultural Heritage in the Balkans was held from 14-18 March 2016 at the World Heritage site of Gjirokastra, Albania. This was the first training within the framework of the Balkan Cultural Aid Response for Emergencies (B+CARE) program.

This course was designed to give participants some basic tools for dealing with emergencies that involve cultural heritage. Participants learned about emergency preparedness, damage assessment for heritage sites, basic protocols for handling collections, as well as the strategies to manage the security and stabilization of heritage at risk.

The training was organized by Cultural Heritage without Borders–Albania and Urban Development Center, Serbia, under the patronage of ICCROM. Funding was provided by the Prince Claus Fund. The training was enriched by the contributions of specialists from ICCROM, GEA Search and Rescue, ICOMOS-ICORP and the Egyptian Heritage Rescue Foundation.

Following the course, the 19 participants from seven Balkan countries became the founding members of the B+CARE volunteer network. The goal of this network is to be the first line of defense for cultural heritage threatened by crisis. Members will be active in emergencies concerning heritage in the Balkans, exchange their experience related to emergency preparedness and response and alert others in case of any disaster. Cultural institutions will have also the possibility to contact the closest volunteers in order to be trained in emergency preparedness and to have the support of the volunteers in case of an emergency.

More information about this training and the B+CARE network can be found here: http://www.balkancare.net/en/about/ 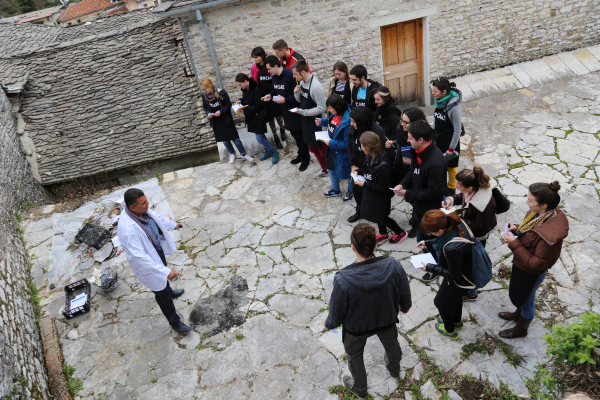 Starting since 2012, Egyptian Heritage Rescue Foundation (EHRF) in collaboration with ICCROM and the Ministry of Antiquities planned to qualify a team of professionals in Egypt. The main mission of this team is to provide first aid to cultural heritage in times of crisis or disaster and form the first line to protect the heritage.

To reach his aim, five national trainings on international standards have been delivered under the title of Disaster Risk Management and First Aid for Cultural Heritage in Crisis Times.  The course methodology involves theoretical studies as well as planned practical visits and simulated sessions; it therefore creates an integrated response towards risks linked to conflict situations. It is meant to increase capacity in dealing with circumstances that create a direct risk to the preservation of cultural heritage during natural disaster, political instability, civil unrest and conflict. It develops museum and site managing ability to assess risk preparedness, provides knowledge for planning and develops skills for disaster mitigation and emergency interventions. Apart from addressing natural disasters, it provides a most effective tool for the efficient prevention of looting, theft and illicit traffic of cultural heritage.

These courses do not rely only on conveying theoretical knowledge but includes, at the end of the program, a final simulation that will allow participants to put into practice what they have learned: a practical exercise in salvaging and providing first aid to collections. Trainees have to demonstrate their skills in documentation as well as professional management capacities: developing teamwork, respecting the chain of command and learning to communicate with the authorities and deal with the press.

In total, 96 Egyptians have graduated from these trainings and have become members of the Egyptian Heritage Rescue Team.

In addition to these five courses, many workshops have been delivered to specific institutions in order to raise awareness among their staff and increase their capacity to assess risks, develop disaster risk management plan and respond to emergencies. Among these institutions, the centre for documentation of culture and nature heritage (CultNat), Ministry of Agriculture, Coptic Museum, Fayoum University, Al-Azhar Al-Sharif Library and many others. 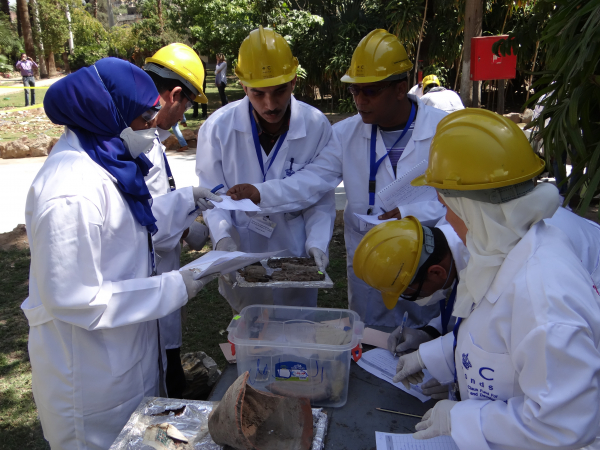