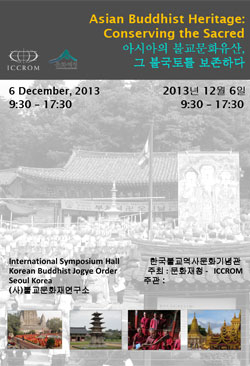 The objective of the 2013 Forum was to consider locally relevant approaches to the conservation and management of Buddhist heritage sites in Asia, rather than externally imposed international conservation policies. The focus was on those Buddhist sites (including some archaeological sites) that fall into the category of ‘living heritage’ as defined by the continuity of religious practices and festivals by community groups.

The specificity of Asian Buddhist heritage is embodied in spirituality and the cyclical nature of life, guided by the Buddhist worldview that recognizes birth, death and rebirth within the overall concept of impermanence. This specificity challenges the prevalent notion of authenticity in conservation practice. Religious spaces and objects are valued for their spiritual function which is manifested through the material, making the intangible inseparable from the tangible.

Originating in South Asia, Buddhism spread across Asia and beyond over a period of two and a half millennia. Buddhist traditions and practices are not static; they have evolved over time and continue to accommodate the contemporary aspirations and needs of the community of believers. The act of merit-making encouraged by the religion enables creation and renewal of religious buildings and objects, additions and modifications of religious spaces through patronage of traditional crafts and other knowledge systems. These traditional knowledge systems are often ignored in the conservation discourse. Over the centuries, traditional systems led by the Sangha (i.e. Buddhist communities of monastic and lay believers) have managed Buddhist heritage across Asia in their respective contexts. Some of the Asian countries have formally recognized the management practice of the Sangha through their legal national frameworks. Therefore, current conservation theory and practice on Buddhist heritage needs to acknowledge these diverse values and practices in order to promote contextual and culturally sensitive approaches.